Weird Food Wednesday – Escamol:  After flying way off the rails in recent Weird Food Wednesday posts, this one almost seems worth attempting to try, emphasis on “attempting.”  Escamol, also known as ‘insect caviar’, this dish is made of the edible larvae and pupae of ants, harvested from the tequila or mescal plant.  Yes, as is the case with all weird foods that the normal among us wouldn’t even consider moving past their lips, this is allegedly considered something of a delicacy.  It is said to have the consistency of cottage cheese and a buttery, nutty taste.

Wait.  “It is said”?!?!?  My guess is that’s shorthand for “no, it doesn’t really taste like that.”  Or it’s what someone who won’t try it tells you when they’re daring you to try it.

Anyway, this is generally cuisine enjoyed by those living in and around Mexico City and the dish is reportedly one that has been enjoyed all the way back to the days of the Aztecs.  Escamole is pan-fried ant larvae that resemble white-corn kernels with a crunchy, nutty taste and is traditionally served with tortilla chips and guacamole. It’s one of the few indigenous foods that is both tasty and memorable without the sticky texture usually associated with eating bugs or larvae.  Somehow this dish managed to survive, but sadly the Aztec Civilization did not.  At least we have the Aztec history, their art, and their architecture to study and enjoy, even if we opt out of tasting the food that they reportedly enjoyed. 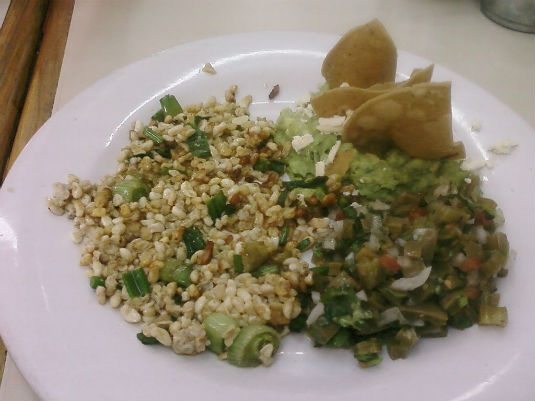