Weird Food Wednesday – Surströmming:  When you’re sitting around thinking to yourself, hmm… I have a craving for the smelliest food in the world, then what your heart and palate desires is Surströmming.  Where there exists a list of the stinkiest foods in the world, Surströmming is very likely to be found on that list. 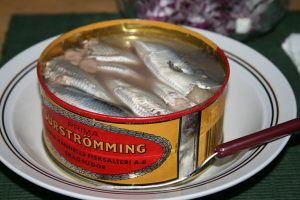 Surströmming is one of Sweden’s most infamous products, perhaps most popular in the northernmost regions of Sweden.  And I believe that this is one of the first “Weird Food Wednesdays” that didn’t feature some allegedly acquired taste from regions in and around Southeast Asia.  Essentially it is a fermented Baltic herring.  Surströmming can only be made from strömming, which is the Baltic herring.  They are smaller than sill, which is the Atlantic herring.  They are caught just prior to spawning and the fermentation starts from a lactic acid enzyme in the spine of the fish.  It releases pungent smelling acids as well as hydrogen sulphide, and those are precisely the items that we’ve seen induce the vomiting in those individuals who like to videotape themselves trying stuff and posting those videos online, especially if it involves vomiting or self-injury.  In this case, the former, not the latter.  Though this acrid, pungent, world-beater of shtanky scent puts it up in the stratosphere of worlds stinkiest foods, apparently many Swedes absolutely love their Surströmming!

Surströmming is apparently so unimaginably pungent that it’s usually opened outdoors.  It was in some of those aforementioned videos, but that didn’t stop it from coming back up for several poor individuals.  It is quite frequently eaten outside also, due to its pungency.  They are normally eaten at the end of August, but hardcore lovers of this aromatic dish are not beyond eating it in the wintertime, where the vomit can be quickly covered up by snow is our guess. 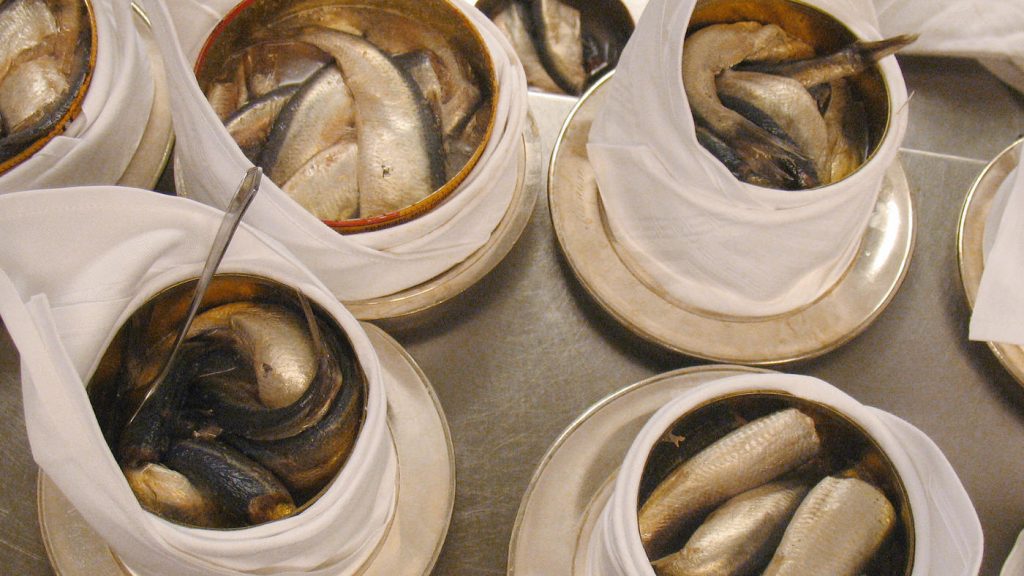 As for preparation, the Baltic herring are caught in May because that’s when they’re in top condition and prepared to spawn.  They are submerged in a strong brine for approximately 20 hours, and this is done to draw out the blood. Heads are removed, herring are gutted, and then submerged in a weaker brine.  The canning process is undertaken in early July and goes on for approximately five weeks, we the first ready cans going on sale in late August.  The cans must be stored in a fridge as fermentation continues in the can — this can cause the cans to bulge quite obviously, though despite a common myth, they will not explode when opened.

As for consuming, Surströmming is usually eaten in a sandwich called surströmmingsklämma.  It is crafted with tunnbröd, a thin bread, and is typically buttered.  Your choice of toppings include:

In southern Sweden, some crème fraîche or gräddfil, a lot like sour cream, is added along with chives, tomatoes, and chopped dill.  Surströmming sandwiches are usually served with some Västerbottensost, which is a type of hard cheese, along with snaps, and lager.

We don’t think any of that sounds worth trying.  And I can tell you this, Misty has been pestering Anthony perhaps to try doing some video tastings of these Weird Foods.  I can also tell you that there isn’t even the slightest hint that he is ever most remotely willing to do so… so sorry to disappoint everyone… until next time…