Weird Food Wednesday – Shirako:  Another fancy name for an animal’s reproductive organs, Shirako is essentially a cod’s sperm sac. The literal interpretation of Shirako is “White Children.”  Apparently soft and creamy to taste you can have it served up steamed or deep fried.  I would imagine that if you didn’t know what it was by definition, it might come across as a creamy, smooth dessert of some sort.  Well, it’s not.  Yes, yes, here we communicate the word delicacy and perhaps the words acquired taste, and hey, it’s really amazing in Japan and all that.

If you’re looking to avoid eating the sperm sac of a cod fish, never forget the work Shirako.  In the U.S. it might also be called Milt.  Hopefully, we can strike both from our vocabulary except to know when it appears on a menu at your favorite sushi restaurant or something.

Truth be told, our research led us to people who have tried it and actually say it’s quite enjoyable if you can get around the fact that you now know what it’s made from.  Some would suggest Shirako Tempura, which offers you the contrast of the sweet creamy goodness of the Shirako in contrast to the crispy tempura batter coating.  Others would suggest ‘chawanmushi’ which is prepared like egg custard in a teacup.  And you may also have Shirako on top of a choice of different sushi offerings.  Finally, there is a grilled variant which enhances flavor and makes it firmer and tighter and less creamy like, well, you know, fish semen.

Generally, it is milder in terms of flavor and has the consistency of runny… cream cheese.  And while fishy and salty for obvious reasons, it is reportedly not overpowering in that regard and can be appreciated like any mild fish.  As for presentation, there are a lot of photos of Shirako out there and each one is more artful than the next.  Is it enough to overcome the knowledge we now all have about the ingredients?  Probably not for me.  I’ve always thought myself a brave and adventurous eater.  That now has all gone out the window with this Weird Food Wednesday feature.

Folks, it’s a big world out there, and people braver than we are eating all manner of weird foods… how about you? 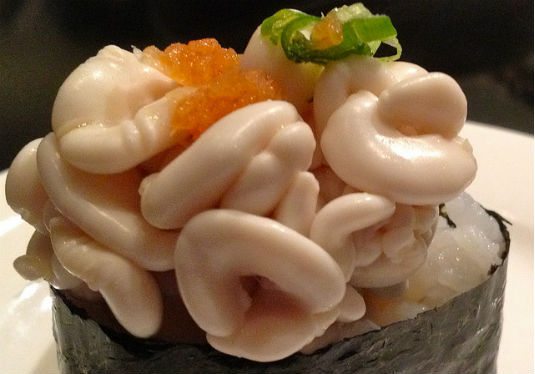