Although traditionally dried or smoked to preserve, they are usually rehydrated and cooked with tomato or chili sauce to flavor. According to an American couple who tried the dish on the Food Network, it tastes like honey-barbeque chicken.  There we go again with the “tastes like chicken” embellishment.

Of course at this point you had to know that these, too, are a “delicacy” somewhere, in this case several African states.  For example, in Zimbabwe, mopane worms are a primary dietary staple in rural areas. They can be eaten dry and crunchy, much like potato chips, but our guess probably not really as good… or they may be cooked and drenched in sauce, our guess to try and cover up the fact that you’re eating freakin’ worms!

And if that doesn’t make you shudder enough, there is the whole process of harvesting and preparation process that will make you gag as though you were eating, well, probably a mopane worm.  The worm a large caterpillar of the Gonimbrasia Belina species.  It is more commonly known as the emperor moth, gaining it’s moniker ‘mopane worm’ due to the fact that it feeds on the leaves of mopane trees in the summer after hatching.

After six weeks of rain, the mopane worms cling to mopane trees in rural southern Zimbabwe. When it’s worm-harvesting season primarily women, but a few men go about collecting the worms and piling them into buckets. The worms are as long as a hand and as thick as a cigar.  They are frequently plucked from the lower branches of the mopane trees, but those more enthusiastic about the process make a point of climbing partway up the tree to shake off the higher worms.  And just in case you haven’t a big bucket full yet, they’ll even go after the ones clinging to life up higher, prying them loose with a long stick for their ultimate demise.

The worms excrete a brown liquid once they make contact with skin, leaving the pickers’ hands wet and slippery. As they harvest the worms, the women and men move from one tree to another until their buckets are full.  A thick slimy green fluid comes out as harvesters carefully squeeze out the entrails from the mopane worms fresh-plucked from the trees. During harvest season, the porches of mud-walled homes are covered with thousands of worms, laid out to dry in the hot sun.

Vegans and ketoists and proteinists should be clamoring to enjoy these delightful delicacies as they reportedly contain three times the protein of beef and are certainly far more environmentally friendly!  So save the environment, start eating mopane worms!  I understand there are some great recipes out there, but I’m not going to find them because I’ll never eat them.

Have a looky there!  I can almost feel the dry-heaves welling up inside my twisted innards… but seriously, folks, if you want to see how much we take for granted in our society regarding food, just go back through some of these Weird Food Wednesday features and see what you would be eating if you were born in some remote part of Africa or Asia or some other place you’ll probably never get to visit… 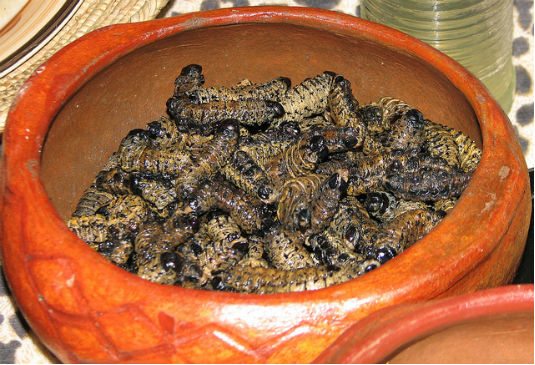